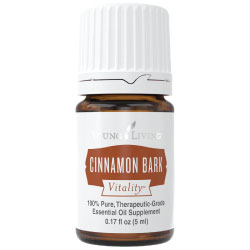 SKU: 5585
$31.58
$31.58
Unavailable
per item
Cinnamon Bark (Cinnamomum verum) Vitality™ essential oil is a concentrated and potent flavor that complements a variety of classic culinary treats. Not only is Cinnamon Bark Vitality™ oil used for its unique and spicy notes in recipes, but it’s also a great dietary supplement and important part of Thieves®, Abundance™, and Inner Defense® essential oil blends.

*These statements have not been evaluated by the Food and Drug Administration. This product is not intended to diagnose, treat, cure or prevent any disease.