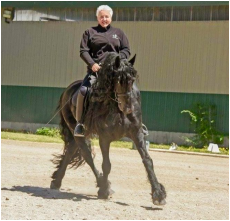 Donnette's passion is in the art of the equine human relationship. She enjoys capturing the journey through many expressions — photography, poetry, film, coaching champions and most of all being a full time student of the horse. The Impact of the Horse:  Mustang vs. Domestic was born out of her desire to merge a private enterprise, Sage Creek Equestrian, with the Bureau of Land Management Wild Horse and Burro Program bringing a new possibility of human partnership for America’s wild mustang herds. Donnette started working with starting colts and working with problem horses under the tutelage of Ben Quinters. Ben introduced Donnette to the world renowned horseman Ray Hunt; thus, the desire to understand a willing partnership was born and has been her driving goal now for over 30 years. Donnette is a well educated horseman specializing in Dressage. Her purchase of a Grand Prix German school master catapulted Donnette into developing a deep understanding of quality upper level movements. Donnette’s greatest devotion is her love of witnessing humans succeed in having a beautiful partnership with their horse.

IMPACT OF THE HORSE - TWO WORLDS ONE EVENT
by Donnette Hicks

What is Impact of the Horse? It's a competition where a community of horsemen bring mustangs and domestic horses together to showcase the usability of America's wild horses. Most would agree “it’s the spirit in which the competition is formulated” that has kept these horsemen from seven states returning year after year. The judging curriculum of this event, is noted for its highest scores going to the horse and rider team that shows the strongest “willing partnership”.  Its aim is to educate and inform by having both the domestic equine and mustang compete together in its main division. Many competitors show both their domestic and mustang breeds.
​The Mega 100-Day Mustang Challenge will kick off the competition at 9:00 AM on Friday, November 11th with the Rugged Mountain Trail Competition, followed by Mustang vs. Domestic Rugged Mountain Trail Competition.  FREE ADMISSION.

Saturday, November 12th the Youth Championship will start at 9:00 AM with a 3-4 minute Freestyle Competition where they have to be able to complete basic tasks with their yearling. All yearlings will be available for adoption at 4:30 pm on Saturday.  FREE ADMISSION.

Also, on Saturday November 12th at 12:00 PM, the top five MEGA 100 wild horses will compete in a 3-4 minute Freestyle Competition with an opportunity for the public to adopt at 4:30 PM on Saturday.  TICKETS FOR SALE ONLINE AND AT THE DOOR for competition.  Adoption/Auction is FREE ADMISSION.

For more information about this event visit: SageCreekEquestrian.com or to follow the horses: FB/Impact-Of-The-Horse-Two-Worlds-One-Event

The first week of December found thirty-five anxious and excited trainers at the Burns Bureau of Land Management (BLM) Wild Horse Corrals. The weather was frigid and snowy;  the horses were fresh and wild.

They horses were foaled in some rim rock valley, under hard sun and wind. They are familiar with coyotes, ravens, pronghorn antelopes, golden eagles, badgers, and great flocks of migrating fowl. They are adept at gracefully negotiating the rough terrain of shrub-steppe, juniper savanna, ponderosa pine, and white fir forests. They are eastern Oregon's untamed horses - the wild mustangs. And this March 2017 they showed off their stuff at the first-ever Northwest Extreme Mustang Makeover in Albany, Oregon.

I have been wanting to attend the Extreme Mustang Makeover in Forth Worth, TX for years now.  The timing for our busy schedules just never worked out.  This year, we finally made it happen.  We decided to share our vacation with our great friends, Bob and Debbie Lusk, who call Texas their home.  Vacations with Bob and Debbie, Buck and I typically are loosely planned and a big road trip.  We have select places to go, things to see or activities planned, but the rest of it is spontaneous.  We have seen more amazing places, done more fun things, met more interesting people, had more laughs and crazy times by this impromptu vacationing.  As I write this, I am still finding myself with a smile on my face, weeks later, reminiscing about the many highlights. ​ 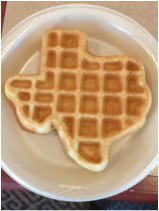 ​
​I have been joking about “eating our way across western Texas”.  While we did indulge probably way too much on bar-b-que, home cooking, pralines, pecan pie, sweet tea, alligator, fried chicken, and too many other things to mention – some of the most memorable parts of our adventure were the history, the small towns and the southern hospitality.


← Even the waffles are all about TEXAS! 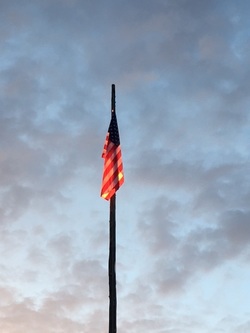 We began our trek shortly after arriving by attending a Friday night high school football game.  Bob and Debbie had a grandson playing that evening.  They kept telling us how high school football was a mainstay in Texas for a Friday night.  In true Texas style, the football game was a BIG deal.  The whole town, it seemed, showed up to support the school and the kids.  Marching bands for both schools were there, fireworks, food, balloons, noise makers.  We stuck out like sore thumbs because we did not don the school colors of either team. We found our way to a spot on the bleachers before the filled up entirely.  It was the Friday before 9/11.  It was sobering to have a prayer read and a moment of silence to remember that fateful day and the lives lost.  Prayer was followed by the National Anthem, which I did not see NOT ONE person NOT standing with their hat off or their hand over their heart.  Song filled the air with the audience singing the words to our National Anthem.  It filled me with pride, with joy, to see an entire community joined together in prayer and song honoring our fallen and celebrating our country and our flag and what it stands for.  After the football game, there was an activity for the youth to get together, through the church, giving teenagers a social outlet in a positive uplifting environment.  I sat and wondered, as I welled up with tears, why more of our country could not be joined in unison, if even for one Friday night each week.  I wondered why my own community did not have this harmony.  It made me wonder what happened over the decades of my life, to pull this country so far apart that patriotism has fallen through the cracks and society as a whole has moved away from God.  This small town was no different that every other town in Texas on a September Friday evening.
Our final destination on our whirlwind trip was the Fort Worth Extreme Mustang Makeover.  Congratulations to everyone who participated.  Wild Heart Mustangs™ was thrilled to have a booth at the event to inform more people about the e-zine and show off some of the photography available on www.WildHeartMustangs.com .  It was a pleasure meeting people I have only known through emails, making new friends, learning new things.  The finals on Saturday night were beyond my expectations.  Right from the beginning with Madison Shambaugh riding her mustang, Terk, at Liberty with a herd of wild horses for the Mustang Magic running around the arena with the spotlight on them.  The finalists’ performances were spectacular, and the competition was tough.  Katie Ketterhagen had a beautiful performance on Teddy and won First Place.  Second Place was Nate Eicher with Ima Shotgun Rider and Third Place was Wylene Wilson Davis with Maverick. Teddy was also the highest bid for the night at $13,500, followed by Ima Shotgun Rider at $7,000 and Maverick at $5,500.  Not to be overlooked in the finals was Briana LaFleur riding Buttercup.  This was Briana’s first attempt at gentling and training a wild mustang.  She is the first person to make it to the Top 10 finals who is a first time trainer for a mustang.  Briana bid on Buttercup and narrowly secured the top bid for him so she could take him home.  I believe we have not seen the last of Briana LaFleur and her work with mustangs.  Her performance was wonderful, so wonderful, the audience booed the judges for their scores.  This is a trainer to keep your eyes on in the future.
To top off the mustang experience, we had the pleasure of seeing the Mustang Magic Mares before they were picked up by their trainers.  It has been awesome seeing the horses in pens before ever being touched, and now following their progress with their trainers.  The trainers for the Mustang Magic are chosen by invitation only.  The horses are assigned to each trainer by the Mustang Heritage Foundation. The mares assigned for the Mustang Magic are all three strike mustangs and are older mares around six years of age.  The trainers competing in the Mustang Magic are exemplary.  The Mustang Magic will be held in Forth Worth, TX January 19th – 21st.  Tickets are on sale now and are General Admission.  This is going to be a Sold Out event.  If you plan on attending, buy your tickets soon….we did!  This is one event I don’t want to miss!
For more information on adopting a wild horse or burro from the Bureau of Land Management click here
For information on adopting a wild horse or burro from the Bureau of Land Management internet adoption, click here
​For a Bureau of Land Management wild horse and burro Adoption Schedule click here
THERE ARE CURRENTLY OVER 50,000 WILD HORSES AND BURROS IN HOLDING FACILITIES.  THAT NUMBER CONTINUES TO GROW.  CONSIDER ADOPTING ONE OF THESE INTELLIGENT, ATHLETIC, VERSATILE ANIMALS.