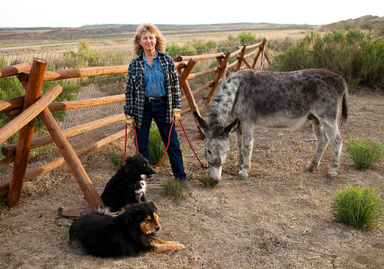 ​​Excerpt 1
I thought back to the day I’d finally found a way to keep my ass from folding up his legs and hitting the dirt with me in the saddle.  In the beginning, I had no idea now to break him of the trick, so I’d asked everyone around the country.  Most trainers didn’t know, because they’d had little experience with donkeys.

Finally an old cowboy that worked up on Three Springs Ranch near Massadona had an answer for me.

“Have you a blanket in front of you on the saddle, where you can get to it real quick,” he said, hesitating and switching his chew from one check to the other.  “When he hits the dirt, you take that blanket and cover his eyes and sit on his neck so he can’t get up.”

“Really?” I asked.  I remember thinking to myself, “How can something that simple break him of going to the ground?”

But I took the advice and the lesson worked like magic.  The next time Jesse put his head down and went to the ground, I jumped off, put the blanket over his eyes, and sat on his neck.  He didn’t like it at all and immediately tried to get up.  Of course, he couldn’t get up with me on his neck.

While I sat on his neck, Jesse moaned and grunted and complained loudly.  He wasn’t hurting, just mad.  I made him stay in that position until he was wet with sweat.  And that was the last time he ever went to the ground with me.

But even after the harsh lesson, he would still stop, put his head down, and think about it.  The head would go down and we could see those big eyes flashing with thoughts:  “I want to go down.”  But then the head would snap back up and he’d catch a gear:  “I don’t want that blanket over my head.”

The process had been a source of great amusement to Jeanne and me.  I had learned that donkeys are much smarter than most horses.  Once they learn a lesson, they never forget. The other problem I’d had over the years riding my donkey was his tendency to balk.  I rode him with spurs, but I seldom had to gig him in the flanks.  He was smart enough to know when I had the spurs on and usually that’s all it took.  I had learned that punching him gently with the spurs worked unless there was something going on with him that I didn’t understand.  It was a continual challenge trying to decide whether Jesse was truly scared or hurting, or if he was just being a jackass.

But after working together for more than ten years, my donkey had taught me to pay attention to his radar.  Like the day I was riding alone north on Blue Mountain and he came to a dead stop, head down right in the middle of a grassy meadow.

I kicked him in the flanks.  His head dropped closer to the ground.

I kicked him harder, gigging him with the spurs.  His body froze in place.  I sat for several minutes, trying to understand.  I looked around for any sign of danger, maybe a mountain lion on the nearby ridge.
​
Finally, I dismounted, took a step forward and let out t gasp.  Less than a foot in front of Jesse was a deep open well.  Possibly and old uranium mine, the hole was large enough that we could have fallen in and never been found. … I rubbed my donkey’s neck, walked him around the well, and praised him over and over.

“You truly are a Smart Ass,” I told him.