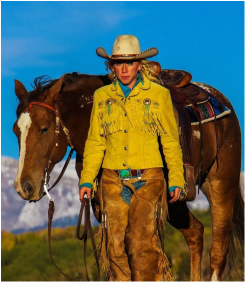 Madison Shambaugh is a 22-year-old horsewoman from Fort Wayne, IN and Telluride, CO. She specializes in gentling and training wild horses and exotic equines, with a focus on liberty and bridleless riding. Her involvement with the American Mustang has earned her the nickname, “Mustang Maddy.”

Madison took a deep interest in equine behavior from a young age. She began starting colts and training horses for the public as a high school student and in 2013 she trained her first untouched mustang. In 2015 she participated in the VA Extreme Mustang Makeover with a Mustang she called, “Terk,” who she later adopted. Here she earned the titles of Rookie Champion, Young Guns (Youth) Champion, Fan Favorite, and Overall Reserve Champion. Madison and Terk’s dazzling bridleless freestyle after just 100 days of training captured hearts around the world. Later in 2015, Madison was named the Colt Starting Challenge USA Champion Trainer at Durango, CO. During this time she also took on the most challenging of equines, a one year old zebra she calls “Zena."

Madison is currently touring across the United States and Canada with her liberty team of 3 previously wild Mustangs, "Zena the Zebra," and a mule to share her unique training approach that has proven successful across species. For more information on Madison’s schedule, you can visit http://www.madisonshambaugh.com/.

THE POWER OF SYNCHRONIZATION
by Madison Shambaugh

Buck and I had the pleasure of meeting Gretchen Loebel and Jennifer Loebel Knight at the BLM Wild Horse and Burro Adoption in Ithaca, NY June 17 - 18, 2016.  While it began with Buck's obsession with a Palomino at the adoption that was not available because she was already adopted from the internet auction, as day waned on and horses were being picked up,the Palomino was still there.  It was by chance that we had been speaking to the adopter and her sister, Jennifer and Gretchen.

Jennifer was from Herndon, VA, Gretchen from Granby, MA.  Sisters who decided to make adopting three mustangs a family affair for the summer in Granby, MA.  Both families joined together for a summer of Mustangs and horses.  I already loved this story.

Buttercup was adopted on the internet auction.  She was from Palomino Butte, OR and is a 4 year old.  They had originally adopted a second horse from the internet adoption, but she arrived with a bad leg injury that they were concerned could not be treated because she was still wild.  When adopting from the internet, you have the right to refuse the horse when you see it to pick it up, for any reason.  Because of the obvious leg injury, they refused the horse (which was adopted by someone else before the end of the adoption).  The Bureau of Land Management allowed them to  chose another horse in exchange.  They chose Poppy, a dreadlocked mare from Divide Basin, Sweetwater, WY.  Poppy is a 5 year old.  Poppy was quite popular at the adoption, as she was very friendly and allowed several people to touch and pet her.  Wait...that's only two!  While Gretchen and Jennifer were at the adoption, they discovered George.  George is a yearling from Beatys Butte, OR and is 15 months old.

Below Gretchen and Jennifer share their experiences with three uniquely wild horses.  It shows how you cannot have a timeline set for any of these horses, not even one of them.  When people ask me, "Is your horse taking longer or is it quicker to gentle than other mustangs?"  I cannot answer that question.  I don't think any of us can.  Each one will develop at it's own pace, when it feels comfortable.  Some will be more challenging than others, as you will see.  I think that is all part of the wonderful experience of having a wild horse.

Proud of  your special mustang, burro, mule or donkey and want to share your photos and stories with us? ​We would love to have them!
​Go to our CONTACT page and email them to us!

No need to be fancy...take a picture with your phone and send it off to us!